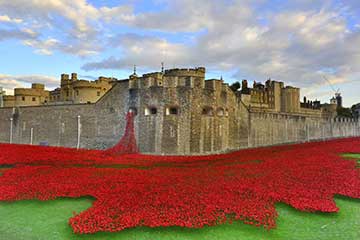 The 4th of August 2014 marks the 100th anniversary of the day Britain entered the First World War.

To commemorate the centenary and honour those who died during one of the costliest conflicts in history, a stunningly creative artwork in the grounds of The Tower of London is being installed.

‘Blood Swept Lands and Seas of Red’ has been created by renowned artist Paul Cummins supported by a 35-strong project team since January.

The evolving installation, to be completed by ‘Armistice Day’ on 11th November 2014, will fill the castle’s dry moat with 888,246 ceramic poppies. Each handmade flower is unique and designed to represent a member of the British or colonial forces who lost their life during the conflict.

To make each poppy, petal patterns are stamped from large sheets of clay and paired together to form six overlapping petals. These are individually moulded to create the shape of the flower and kiln fired to fix their position. A bright red glaze is then applied before a second kiln firing and a 2ft metal stem welded in position to complete the poppy.

Mr Cummins took inspiration from the account of an unknown soldier from Chesterfield, who died in Belgium during the conflict and described how he lay in a ‘blood-soaked’ Flanders field surrounded by his dead friends.

Stage designer Tom Piper, helped integrate the Tower of London seamlessly within the artwork, with thousands of poppies pouring like blood out of the Tower and flowing into the surrounding moat.

He said: “I’m literally trying to represent people because a number is a number, but if you see it all like this it is a visual idea of how many people were there.”

“We also wanted to make sure it didn’t become regimented mass rows of poppies – there is an organic quality to it – so taking the line of the ‘seas of red’, a feeling of waves of movement so that some of the poppies are higher than others so you can see them gently moving in the breeze… just to give it a sort of energy, the energy of all those who lost their lives.”

Each ceramic poppy will be available to buy, with the sales proceeds which are expected to be in the millions, to be shared equally amongst six service charities.

Stunningly creative artwork in the grounds of The Tower of London.