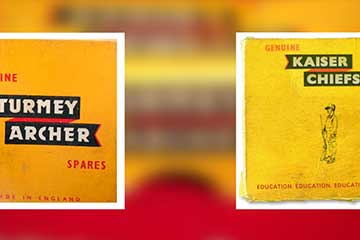 The subject of creative inspiration / homage versus blatant rip-off is a prickly one at the best of times. It’s often said that there’s no such thing as an original idea and that every idea worth having has been had thousands of times already. Designers are frequently accused, unfairly in most cases, of simply reimagining what has gone before.

However, most casual observers might think that describing the cover artwork of Kaiser Chiefs’ latest offering as a “homage” might just be stretching it a bit…

Ironically, a few years prior to the album’s release, the assets and trademarks of Sturmey-Archer were sold to Sun Race of Taiwan and production subsequently moved there.

Copyrighted material used under Fair Use. If you are the copyright holder and believe your material has been used unfairly, or if you have any feedback, please contact: hello@besplendid.uk

Kaiser Chiefs #1 album has raised more than a few eyebrows.