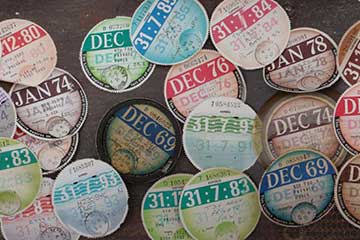 True ‘design classic’ status is not created but earned – based on creative execution, restraint and enduring qualities. Any changes over time must be highly considered, so as to maintain integrity.

After 93 years, the UK Vehicle Tax Disc has been replaced in 2014 with an electronic system and we wondered whether or not this humble but ubiquitous piece of design might be considered as classic?

The first Tax Disc was introduced in 1921 as a receipt to prove payment of a tax that allows you to use and park your vehicle on the public highway in the United Kingdom. The original ‘disc’ was not actually circular but rectangular in shape, made from plain grey paper and printed in black ink. They had to be either cut or folded to fit the circular holders, which were less expensive to make.

In 1923, color printing was added, as were two security measures: the intaglio script and a band of broad green. The security script read “Road Fund License” and was included to prevent forgeries.

Changes to the appearance of the Tax Disc were made every few years and in 1938, new technology enabled discs to be perforated for the very first time, making it easier to place in the circular holder.

This particular design continued with just minor changes in colour and wording until 1956 when the disc underwent it first major redesign. The new design omitted the United Kingdom symbols and ‘vehicle colour’ box. It also featured two solid bands of colour at the top and bottom of the disc.

The forging of discs was a perennial problem and in a major effort to try and deter fraud, a more complex new design consisting of various circular vignettes and bands of solid colour, plus a half-tone background was launched in 1961.

The Tax Disc changed colour every year in the sequence of blue, brown, green, and red. However, the attempt to deter forgery failed dramatically when it was found to be relatively easy to ‘amend’ Guinness bottle labels to mimic the brown colour of the 1962 Tax Discs to evade payment. From 1963 onwards, the expiry date was duplicated in the toned area of the design in response to the widespread “Guinness Tax Disc” fraud.

In 1974, the newly created computer-based DVLC at Swansea took on national responsibility for the licensing of drivers and vehicles. Since then, further design changes to thwart the forgers have been introduced, including star-shaped perforations, embossing, foil, bar codes and even holograms that pixelate coarsely when scanned.

Whether or not the Tax Disc will be considered a design classic is debatable. However, the palpable excitement of getting your very first Tax Disc to go with your newly acquired driving licence and the sense of a true coming of age will never be quite the same.

After 93 years, the UK Vehicle Tax Disc has been replaced.