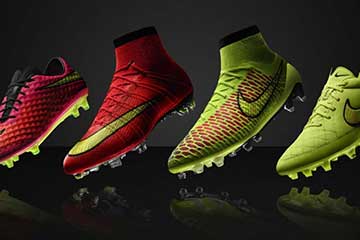 Maybe the established global superstars of association football didn’t shine quite as brightly as we’d hoped during the 2014 FIFA World Cup Brazil™ but their boot designs certainly didn’t disappoint. Traditional black boots are now greatly outnumbered by a myriad of vivid colours and designs, many of which made their debut this month on the television screens of millions of potential customers.

Adidas launched its Battle Pack boots collection to coincide with the tournament after two years in development. The five new designs in the range feature “disruptive” black and white prints designed to make them stand out against the green of a football pitch.

Gerald Kuhtz, lead developer for the collection, said “Everyone expects a tournament in Brazil to be full of green, yellow and other bright colours. We felt this was prdictable so we chose to be different with each boot exactly 50/50 black and white. The designs resemble the iconic Copacabana beach paving pattern in Rio and were also influenced by motifs found in the tribal war paint of native warriors from different cultures.

To stand out against the black and white pattern, each boot features the iconic Adidas triple strip in orange or gold, intended to repesent the gold of the World Cup tropy and “the fire from the football gods, as the players prepare for battle”, added Kuhtz.

Holland’s captain Robin van Persie and Argentina’s Lionel Messi were among those players sporting boots from the Battle Pack collection in Brazil.

Nike’s 2014 World Cup boot collection whilst visually striking, concentrated more on product technology as the company sought to provide athletes including Cristiano Ronaldo, Franck Ribéry and Eden Hazard with every advantage on the world’s greatest stage.

Copyrighted material used under Fair Use. If you are the copyright holder and believe your material has been used unfairly, or if you have any feedback, please contact: hello@besplendid.uk